Every year, AHCMC awards the Ida F. Haimovicz Visual Arts Award to a highschool student who posesses an extraordinary gift for the visual arts.  The honor includes an opportunity to mount a solo exhibition at the Betty Mae Kramer Gallery & Music Room as well as a cash prize of $3,000 to support the advancement of a career in the visual arts.

Below, our 2016 award recipient Zoe Hall discusses her inspirations and shares her experience as this year’s winner. 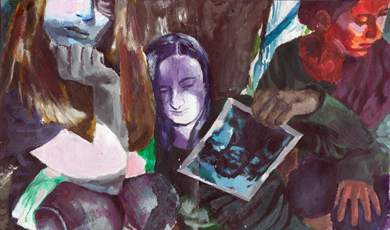 Everyday moments are so fleeting, I often get the urge to preserve any I find particularly moving. Usually I’ll be with someone, maybe drinking tea with my mom or lazing around in the basement with my friends.  Then the lighting will be just right, and all of a sudden the person I’m with enters this state of enhanced personhood.  Their expression reveals something about them that isn’t usually obvious, and it feels perfectly suited to the environment they’re in at the moment.  I think everyone experiences this, and tries to remember it in different ways.  I want to re-create my experience of these moments in painting form, and hope the viewer is able to be similarly entranced by them. 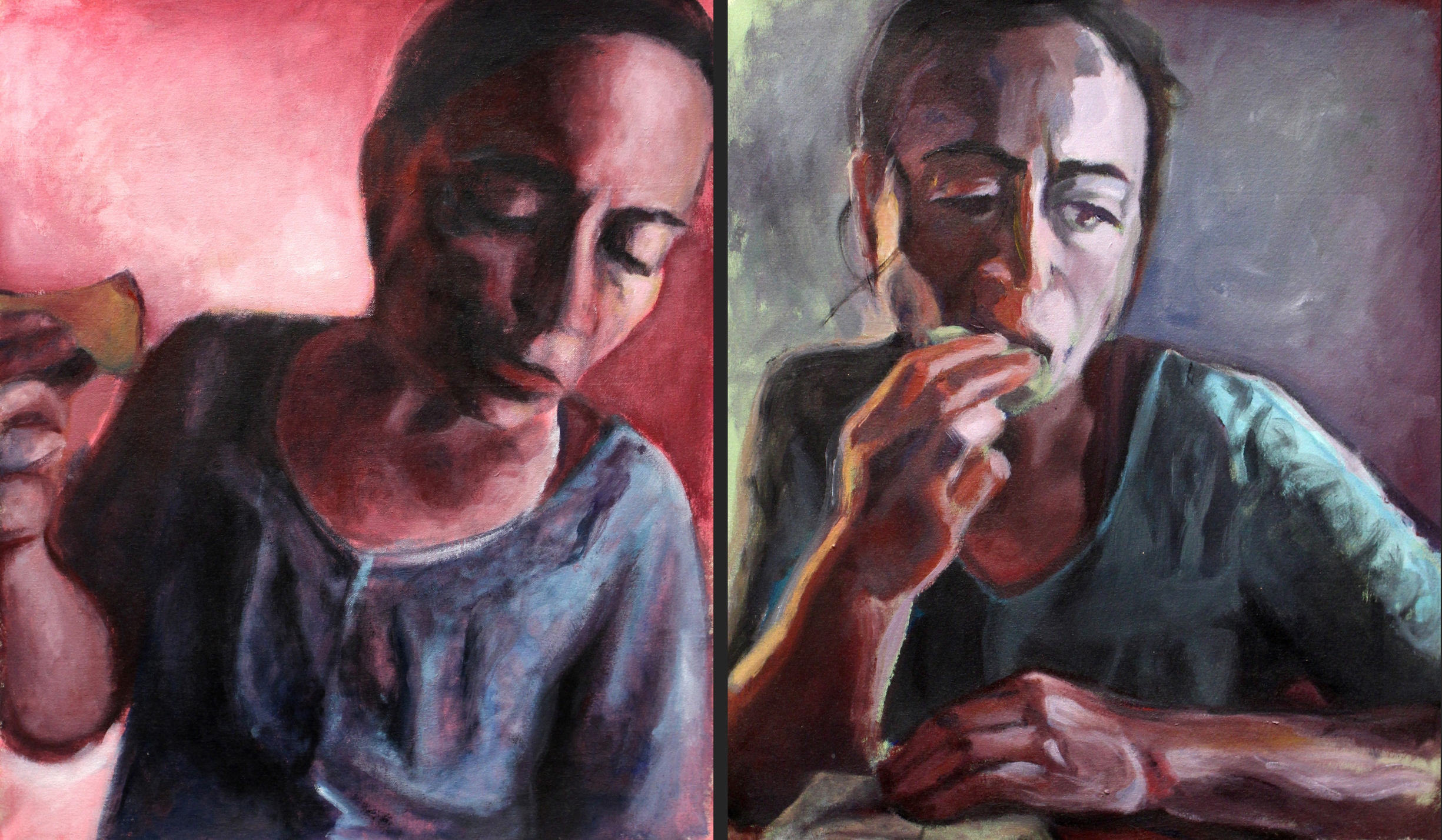 In eighth grade, my teacher urged me to apply to Einstein’s Visual Art Center program.  I was skeptical at first, because I couldn’t envision what would make an art program so amazing (and worth the long commute).  Attending the VAC’s spring art show revealed to me what made the program unique.  I was at first impressed by the quality of the artwork hanging on the walls.  We were then invited to take a tour of the classroom itself, which seemed more like a quirky clubhouse than a classroom.  The walls were plastered in doodles and magazine scraps.  Vintage toys, fake fruit, mannequins, and other still life objects collected in every corner.  I especially enjoyed talking about art with the other students.  One boy showed me a painting of his grandma that represented “sadness,” and I remember thinking, wow, that really does look like sadness.  A fellow middle schooler pointed out to me a painting that she liked the color of.  I realized that I wanted to be around kids who liked making and talking about art as much as I did, and the VAC attracted those kids.

I was immediately thrilled to learn about winning this award and having my first solo exhibition. It was at first hard for me to comprehend how art shows work.  I started imagining myself lovingly decorating the walls with odd little doodles and strings of pom poms, as if I were decorating my bedroom. It turns out that most of my time was spent learning how to frame drawings and stretch canvases, which was a lot of work!

In the end, having a cohesive-looking show was all I could ever ask for.  The night of the reception was way beyond my expectations, though.  Everyone was extremely supportive, especially the family of Ida Haimovicz.  I enjoyed meeting the amazing poet Emily Zhang, as well as getting to watch my family and friends react to the what I’ve been making somewhat discreetly over the years. 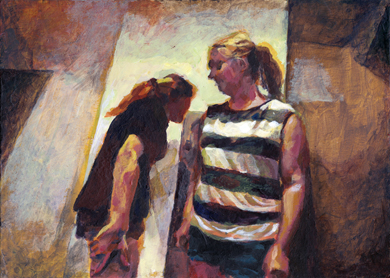 I have chosen to attend Virginia Commonwealth University, where I will major in something art-related.  My first year will be in VCUart’s Art Foundation Program, where I am excited to try out as many different art forms as possible.  I am interested in everything, so I’m sure to learn something new! I would love to be the art director for a children’s TV show, or even the character designer for an animated movie.  I also like the idea of teaching art to a variety of people, inspiring those who don’t think they’re artistic or encouraging those who are obsessed with art.  I can even see myself as an interior designer, because there still aren’t enough cute cafes or cozy restaurants in the world.  In my wildest dreams, I own my own cupcake shop and have chickens.  Probably better to start small, but I do plan on working towards one of these options.

Raised by parents who emigrated from Liberia, West Africa as foreign exchange students in 1978, Lendeh finds inspiration from her African heritage and explores themes of identity in landscape, portraiture and pattern design. She was compelled to initiate her most recent series of painted and printed portraits on silk in response to the public discourse surrounding the highly publicized Mike Brown and Trayvon Martin shootings. Below, Lendeh discusses social justice and activism through the visual arts and the origins of her current project, the “Pain Portrait Series”.

Feeling enraged from the Trayvon Martin case and other high profile cases of police violence against unarmed African American men and women was really the starting point of several automatic drawings, a combination of portraits and textural marks. 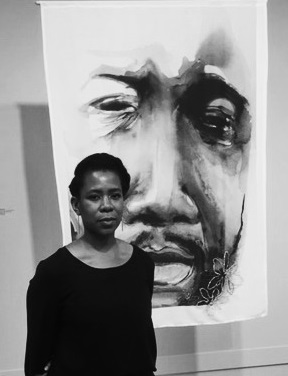 Try On My Grief (Lesley McSpadden). Pigment Dye on Silk Crepe de Chine (16mm), Glass Beads, Thread. 2015.
Portraiture has always been a subject I enjoyed and I wanted to focus on the emotional turmoil of the parents because they are the ones left to suffer. More than capturing a likeness, the heavy toxic emotions they expressed is where I found my heart open and yet felt others completely closed. 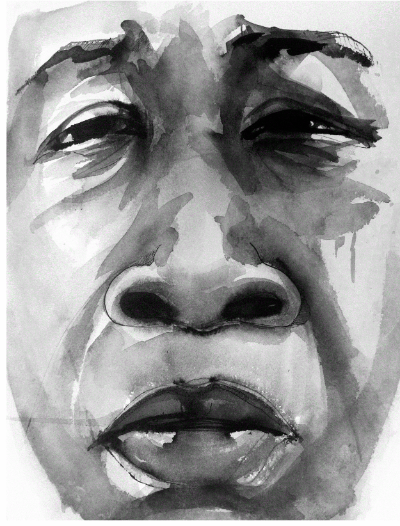 “I wanted to create something that would totally confront you. I enjoy art that confronts social injustices because of the opportunity to engage in conversations on difficult issues with strangers where perceptions, opinions and beliefs can be challenged. I feel a sense of responsibility to focus on what disturbs me personally.”

I’ve had a mix of reactions to the Pain series. Most people are intrigued by the scale, materials, and are interested in the process. Quite a few people have mentioned feeling strong emotions from the images without even knowing the stories behind each portrait. I plan to continue working on the Pain portrait series as well as a series of portraits based on Ebola survivors which I have already started.

“rise + fall: new works by Adjoa Burrowes and Lendeh Sherman” will remain on view through December 4th, 2015 at the Betty Mae Kramer Gallery.  Lendeh has worked in the field of graphic design and has exhibited her artwork in many galleries and festivals including the International African Arts Festival, Artdc Gallery at Lustine Center, the Embassy of Liberia in D.C., Artomatic, A.I.R. Gallery and FestAfrica. To view more of Lendeh’s work, visit www.lendeh.com.

In the past, my artistic practice consisted of primarily working in 2-D collage. My current work with cardboard boxes, however, was sparked by a cross media class I took at the Corcoran/GWU while working on my Masters. The professor encouraged us to experiment with a variety of media and to fully explore the true nature and meaning of materials. I was drawn to cardboard because it is so commonplace, yet the multiple layers consist of smooth and textured board that intrigued me, as well as the variety of natural tones inherent in the plain boxes. 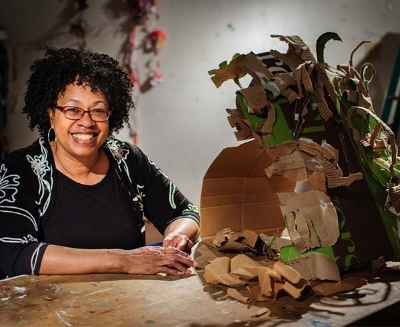 “A box is basically a geometric shape with the ability to hold, house or conceal something – or not. Initially, my main concern was to transform these plain cardboard boxes into something else and at the same time draw attention to questions of our consumer habits and larger environmental issues.”

One aspect of my installation consist of large floor sculptures created from basic brown cardboard boxes that have been torn, twisted, folded and peeled to reveal multiple layers.My intent was to examine my consumer spending and draw attention to issues of consumerism and waste in western culture. Many questions came to mind as I worked on these pieces including: what do the items you value and consume on a regular basis say about who you are, the society you live in, and our culture? Also as an artist, how can I transform a fairly mundane object into something else?

Each of these brown artifacts was produced from a single cardboard box with the exception of one bright orange floor construction that was made from multiple shoe boxes. The colorful wall-hung sculptures were produced from primarily shoe boxes, either cut or torn into linear constructions. In many, several boxes were combined. Shadows play on the wall behind them. Many have a skeletal feel, reminiscent of an excavation. I tried to maintain the integrity of the object by refraining from using adhesives and fasteners as much as possible.

I worked as a packaging designer for large corporations across the country, including Mattel Toys, Campbell Soup and at one point even Barnum and Bailey Circus. I spent so many years designing detailed, elaborate packaging for a variety of foods and objects of play. I think it’s interesting that now I’m focusing on the opposite – the deconstruction of consumer packaging in my art practice.

“rise + fall: new works by Adjoa Burrowes and Lendeh Sherman” will remain on view through December 4th, 2015 at the Betty Mae Kramer Gallery.

Events for "Bassically Yours: The Jazz Photography of Keter Betts" 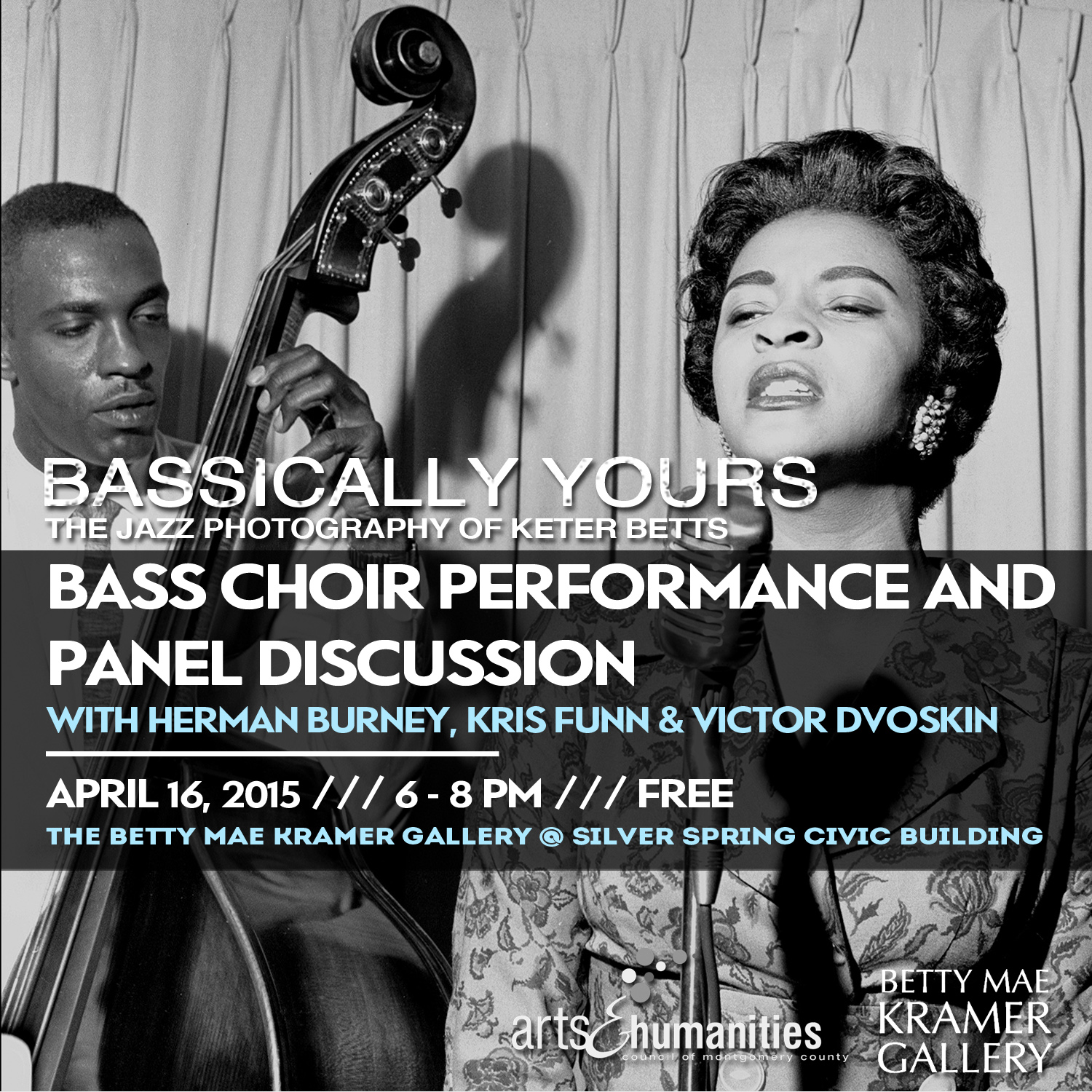 Bass choir performances by Herman Burney, James King, & Victor Dvoskin in The Betty Mae Kramer Gallery & Music Room as part of the programming for The Arts and Humanities Council of Montgomery County's (AHCMC) celebration of April’s National Jazz Appreciation Month. The exhibition on display is the world premiere of photographic works by internationally renowned jazz bassist Keter Betts that features historic portraits of notable musicians, singers, and other important figures of the Greater Washington jazz scene of the 1950’s and 1960’s. Bassically Yours: The Jazz Photography of Keter Betts will remain on view through May 29, 2015 at the Betty Mae Kramer Gallery, located in the Silver Spring Civic Building. 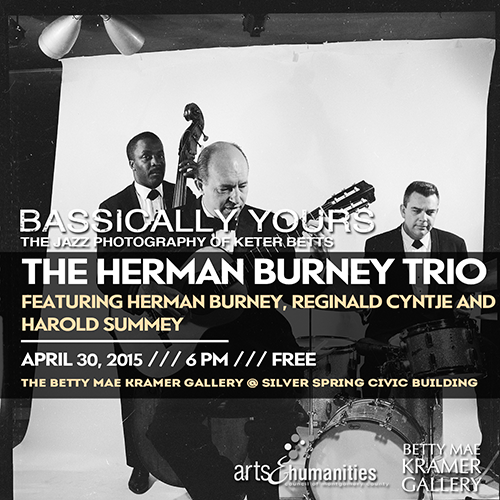 Special performances by the Herman Burney Trio featuring Herman Burney, Reginald Cyntje and Harold Summey in The Betty Mae Kramer Gallery & Music Room as part of the programming for The Arts and Humanities Council of Montgomery County's (AHCMC) celebration of April’s National Jazz Appreciation Month. The exhibition on display is the world premiere of photographic works by internationally renowned jazz bassist Keter Betts that features historic portraits of notable musicians, singers, and other important figures of the Greater Washington jazz scene of the 1950’s and 1960’s. Bassically Yours: The Jazz Photography of Keter Betts will remain on view through May 29, 2015 at the Betty Mae Kramer Gallery, located in the Silver Spring Civic Building. 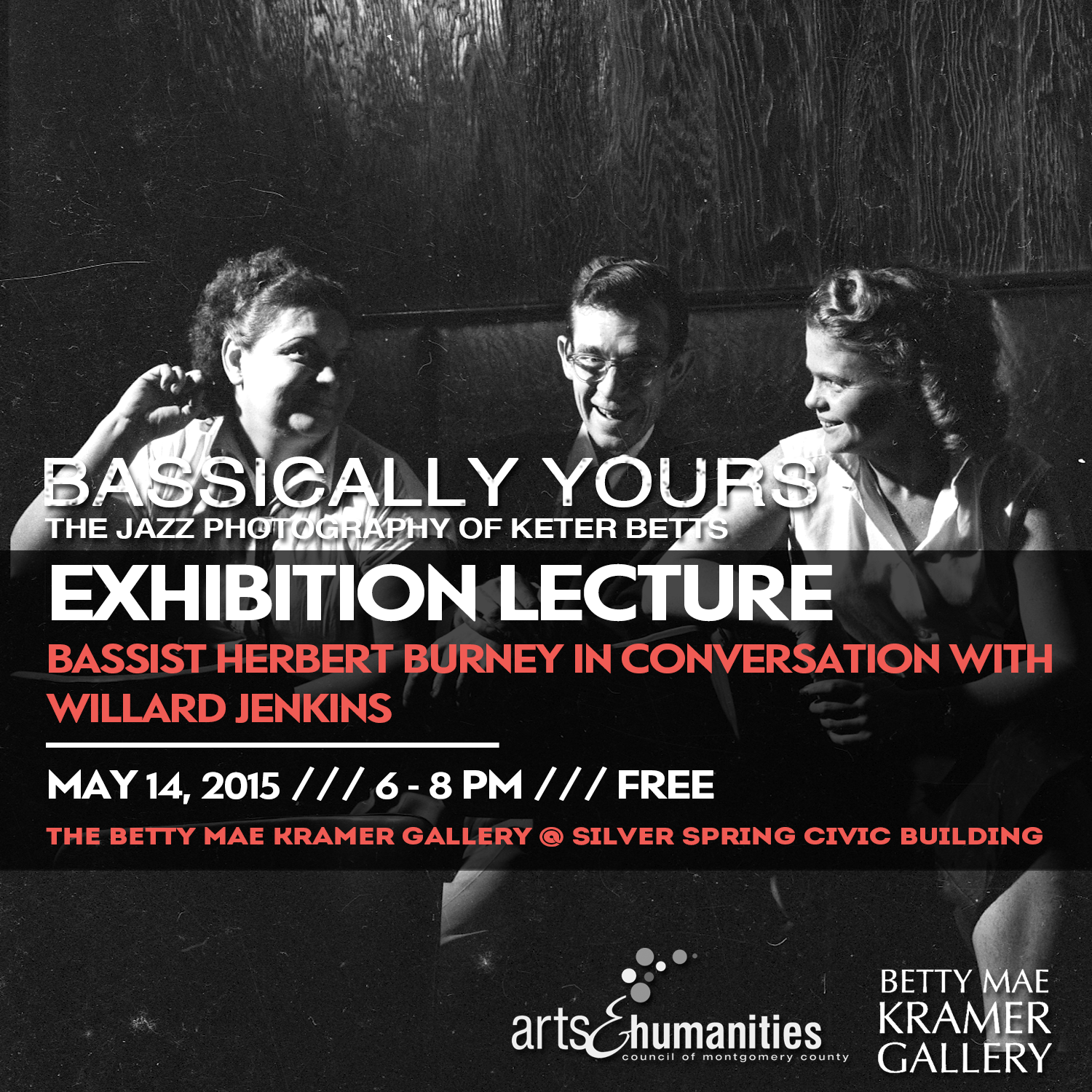 Bassist Herman Burney and Willard Jenkins will present a lecture on the current exhibition: ”Bassically Yours: The Jazz Photography of Keter Betts” as part of the programming for The Arts and Humanities Council of Montgomery County's (AHCMC) celebration of April’s National Jazz Appreciation Month. The exhibition on display is the world premiere of photographic works by internationally renowned jazz bassist Keter Betts that features historic portraits of notable musicians, singers, and other important figures of the Greater Washington jazz scene of the 1950’s and 1960’s. Bassically Yours: The Jazz Photography of Keter Betts will remain on view through May 29, 2015 at the Betty Mae Kramer Gallery, located in the Silver Spring Civic Building.