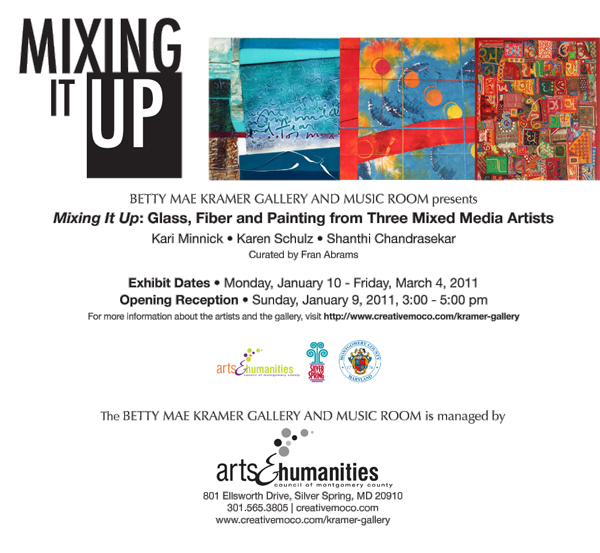 Past Exhibition 2011: Mixing It Up

Kari holds a degree in studio art from the University of California at Davis and has been an exhibiting artist and educator for over twenty-five years. Kari’s life and work are a study of contrasts: order and chaos, thick and thin, questioning and acceptance. Using rich surfaces and layers of glass, she contrasts fleshy realism with abstraction.

Like Linus, Karen’s love affair with fiber began with her childhood blanket. She learned to sew at her grandmother’s knee at the age of nine. Her first quilt, a bed quilt, was made 30 years ago. Five years later, she began making quilts for the wall. She has pursued her development as an artist full time for the last five years, spending countless hours in the studio and studying with many talented artists. Her work has been juried into many national exhibitions which have traveled across the country and internationally.

Shanthi is a self-taught artist who has been drawing and painting since early childhood. In recent years, she also has added sculpting, Tanjore painting and printmaking to her repertoire of skills. While many of her works are influenced by her Indian heritage, her true inspiration comes from the mystery and majesty of the world around her; her muse lives where the scientific overlaps the spiritual. Shanthi’s work has been displayed in a variety of locations throughout the Washington D.C. area, and she has won numerous awards for her paintings as well as her sculptures. She works from her studio at Pyramid Atlantic in Silver Spring.